I specialize in foodservice design and consulting.

To speak with me please contact our Sarasota Office:
800.850.6638 x 3
Michael@pesdesigngroup.com

Michael began his career in foodservice in the early 1990s working for a full service restaurant chain local to Sarasota, FL. He held a position in restaurant operations and management for 15 years until in 2007 he transitioned his career to the world of foodservice design.

From 2007 through 2011, Michael served as a Design Associate for Fishman and Associates (Venice, FL), serving as Lead Designer from 2011 through 2021. While there he designed and managed many projects from K-12 schools to Healthcare, Restaurants and Bars. He oversaw designs for all First Watch Restaurants opened between 2011 and 2016 and, notably, he provided design on the newly constructed CoolToday Park the Atlanta Braves Spring Training Stadium, in North Port, Florida.

In 2021, Michael assumed the role of Director of Foodservice Design for PES Design Group.

• Member of the Food Service Consultants International (FCSI) since 2021 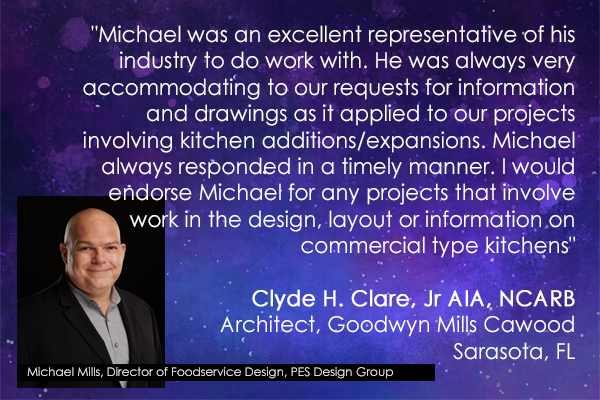